As we have for the past three holiday seasons, Sherman and I went to see Santa Claus at his dog daycare this weekend–Sherm’s daycare, not one at the North Pole, of course. All the proceeds from photos with the jolly old elf go to support animals in need through Second Chance Animal Rescue Society, the organization through which we foster homeless dogs until they find permanent families. Although it’s admittedly a big lump of fun to take the speckled one for a festive photograph, it’s also really important to me to give back a little to the animals in our area who aren’t as lucky as Sherman and Leroy.

This year’s shot is the best yet, I think. In past years, Santa has looked a little haggard by the time our appointment rolled; this time, however, he looks pretty fresh, considering. 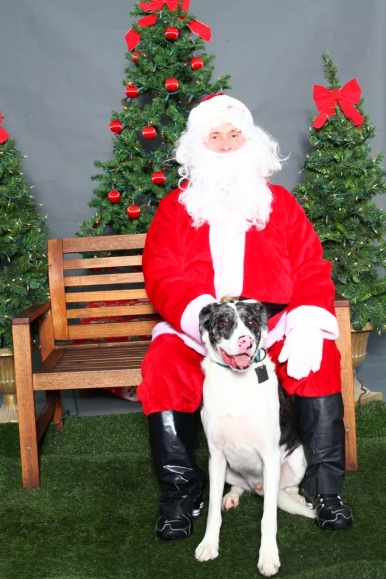 See how “alert” Sherman is in this photo? His ears are tucked back a bit like he’s ready to take off running, because just before this photograph was captured, that’s exactly what he did. I suppose it’s a little bit mean to take Sherman for a photo session in the same big room where he is used to playing all day with other pups, and I can’t really blame him for being far less interested in Santa than in the other dogs waiting for their chance to tell the big guy what they’re hoping to find in their stockings Christmas morning.

Anyway, the first time I lined him up for his picture, I thought Santa had Sherman’s collar, and Santa thought I was still in control of the mottled mutt. Sherman generally listens well when I ask him to “stay,” but I guess at what he thought was a play date, all bets were off. He dashed across the compound, sniffing both human and canine butts on the fly, cocked his leg on the fence, and took off through the narrow chute that’s closed during daycare but was open to allow folks in to meet Santa. I only half have the number of legs he does, and when I caught up with him at the front of the daycare, he wheeled to face me, sat, and made the face that indicates he knows he’s in trouble. I marched him back to Santa by the collar, and we managed to get this year’s photo, which is fairly illuminated by the excitement of one poor dog who was not allowed to play at daycare.

There we have it, our holiday photo where Santa has it all together, and Sherman is barely keeping his manners intact. They say Santa sees everything we do, and after witnessing Sherman’s antics directly, I expect the reindeer will just fly right past the dollhouse this year.