We have another foster dog. This time, our houseguest is a large male something or other. The “something” is probably Akita, and the “or other” is anyone’s guess. He’s remarkably handsome. 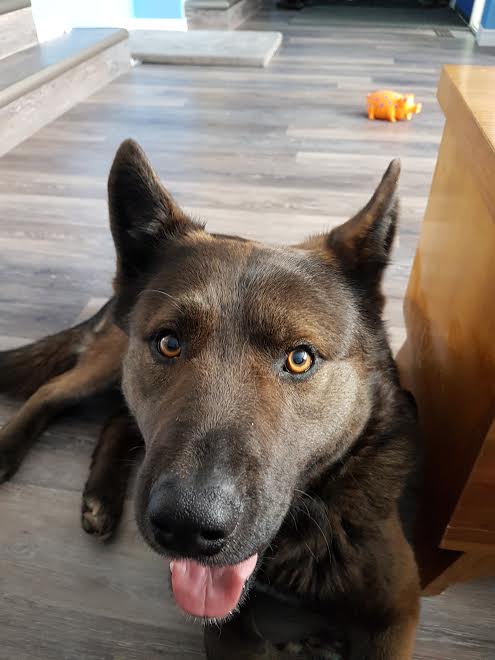 All has been going well with Norman until today. He gets along well with our dogs, Ava and Sherman, despite a slight disagreement with Sherm at their initial meeting. Even Leroy the cat and Norman are buddies. Norman is housebroken, rarely barks, and is a snuggly dude who loves to have his ears rubbed.

Like I said, things were going so incredibly well with Norman until today. We let him sleep in our room outside his crate last night because he has been so clean in the house and he looked so comfy on a dog bed; it seemed a shame to disturb him.

This morning, Norman would not go into his crate. Would not. When a 70 pound dog decides he is simply not going into the kennel, I don’t have the brute force to lift him in. He didn’t growl, or threaten me in any way. Aggression is just not his style. Instead, he made his whole body rigid and dug in his emergency brakes, all four of them.

I tried a dog biscuit and he didn’t even bat an eye. Our standby, freeze-dried chicken breast, nearly tempted him but wasn’t convincing enough. Finally, when Gorgeous Norm’s stubbornness threatened to make me late for work, I went for the big guns: genuine bacon bits. About a half teaspoon of bacon later, I had a crated dog and barely enough time to get to school on time. Crisis averted!

I thought that was the end of the challenges with Norman today. Not so.

I came home from work, and did not realize that Norm threw up all over himself in his kennel at some point during the day. My head cold has made me immune to all kinds of smells. This is a benefit working in a junior high, but is not so helpful in caring for dogs. So I did not notice the vomit until after I released Norman from the kennel.

And then it was too late. 70 plus pounds of dog tore through my house, splattering puke on surfaces high and low. He tracked the ick with his big handsome feet. His big handsome tail spattered my walls four feet up with bits of vomit. He shook his big handsome self in the kitchen before I could catch him, and nothing was safe, not even the other dogs.

And so, a long Monday became longer as we filled buckets with shampoo suds water for the canines, and another with Lysol for all impacted non-dog surfaces. Gross. Oh so gross.

Whining aside, Norman is a true peach of a mutt. We would adopt him if we weren’t already maxed out for big dogs. If you or someone you know is looking for a large, charming, and intelligent boy, please get in touch with Second Chance Animal Rescue Society to find out more about meeting this gem.