Summer in Alberta means long hours of golden sunlight, vibrant green spread enthusiastically to the edge of the horizon, and thunderstorms that startle a person from her bed sometime around three in the morning. Summer also means opening every window I can after dinner in the hopes some cooler air might sweep through the dollhouse and settle down some of the sizzling humidity.

Since The Electrician replaced the screen in our back door, I’ve been able to return to the most effective process for cooling our tiny abode: opening both solid doors and letting the breeze (hopefully) skim through the house. I lock the front screen door, so there isn’t much worry about people wandering in uninvited. Further to that, the moment I open our front door, Sherman takes up his post watching the sidewalk and the avenue, ensuring no car, pedestrian, skateboarder, or squirrel gets too close to his property.

There’s something very reassuring about knowing no animal, vegetable, or mineral stands a chance of getting through our door with Sherman on guard. He is happy to sit for hours, taking in the fresh air and surveying his territory. It doesn’t matter that we store his food in the front porch; he has no interest in sustenance while he’s on watch. I can offer him treats, bones, and belly rubs, but there isn’t much that can make him leave his station. He’s a good little solider. 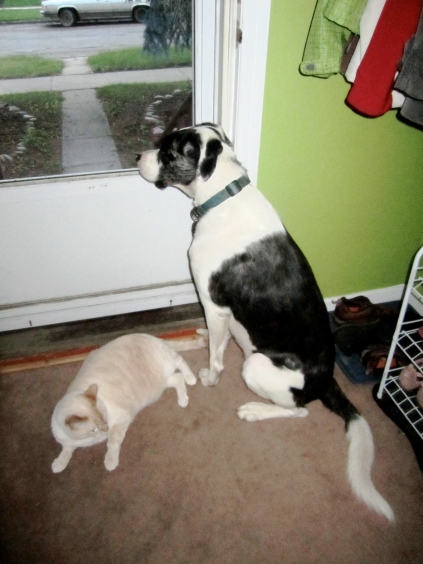 We won’t talk about the fact that Sherm tends to “boof” and/or rumble at most things that pass by the front of the house that aren’t automobiles. Generally, it’s just a few warning noises to inform those in the vicinity that he is aware of their presence. It’s kind of like a doorman or security guard saying hello to folks who stroll past: it’s not meant to intimate as much as it’s designed to announce that someone is watching. You know, just in case someone decides to try something foolish. He really only cuts loose if someone kicks past on a skateboard. I have no idea why, but Sherm hates that single mode of transportation with a deep and abiding passion.

Sometimes, Leroy joins Sherman on patrol, but usually just to watch the neighbourhood birds hanging out in our spruce trees and the big shrubs–or to simply lounge near his buddy. He will, however, start growling his little kitty growl if someone comes up the sidewalk or onto the porch while I’m home alone. As much as he’s about the dullest knife in the drawer, Leroy has “defend his momma” instincts like every other creature.

I’m lucky to have such excellent protectors, and perhaps even luckier that my security works without complaint, for kibble and ear scratches.