Pet ownership comes with many responsibilities: sadly, many of them involve poop. I decided on short-haired mammals to keep the grooming duties to a minimum (frankly, we have enough to do with all the walking and the pooping) but the boys still need their nails trimmed on a fairly regular basis. Sherman’s claws are easy, largely because I have them cut at doggy daycare every few weeks. Leroy, on the other hand, requires pedicures at home.

The process is pretty simple for both of us. I know many people whose cats can smell nail clippers seven miles off and won’t come near them if it’s trimming time. These people have intelligent cats. We have Leroy. All I need to do is sit on the couch and pretend I’m available for a snuggle, and he curls up in my lap, oblivious to my ulterior motive until the snipping begins.

I cut Leroy’s claws with people toenail clippers. I figure I’m better off operating a tool with which I’m very experienced than trying to wrangle a cat while attempting to use a sharp implement I handle only once a month or so. As a bonus, Leroy has totally clear nails, so the quick is highly visible and easy to avoid.

It usually takes until about the third nail for Leroy to realize he isn’t getting the cuddle he anticipated. By that point, he typically decides to hang out and put up with the snipping because he’d rather be next to people than doing just about anything else.

Since starting my new job and being wrapped up in life’s many recent changes, I freely admit I’ve gotten a little lax with Leroy’s grooming. He is a very clean creature in general, so it’s just his toenails that need my attention. Sadly, I never remember that he needs a trim until he sits half in my lap while I’m eating my toast in the morning. About seventeen seconds after he starts purring, Leroy starts to knead my leg with his paws, and about four kneads later, he hooks the claws on one or both feet into my thigh. At that point in the morning, I don’t have time to stop and deal with his talons, so I make a mental note to deal with them after work. By the time I arrive home from the office, my mental note is confetti and the whole shebang starts over again at breakfast the next day.

Tonight, though, tonight I’m prepared. Let’s see if we can lure Leroy into a pedicure. I’m already in stretchy pants anyway, and they’re already covered in loose hair from taking Sherm for his evening walk. I shall sit on the couch and make clicking “here kitty kitty” sounds with my mouth.

Attempting to arrange Leroy into prime trimming position was more difficult than actually luring him to my lap. He snagged himself in my blouse a few times before I got him facing the right way and he stopped drooling on my clippers. I surveyed his arsenal; it wasn’t pretty:

As predicted, Leroy was mostly happy to let me cut his nails, and he fought very little once he realized what was going on. I was feeling very proud of myself for keeping up the cat-related care tasks, until I went to feed him and scoop his litter box shortly after the pedicure was done and found two large piles of partially-digested cat food vomit and one remarkably large hairball on the hardwood floor in my office, a.k.a. Leroy’s study. I can handle cleaning up vomit, but wiping up the mess while it’s still cat temperature is a little beyond my comfort zone. Ugh.

Here’s the question: did Leroy know I was writing about the intimate details of his grooming tonight and decide to retaliate with puke, or was the mess I had to clean up just bad luck? I’m not about to start thinking a cat whose daily cognitive operations are far more bicycle than Corvette has been plotting against me. He simply lacks the motivation and the capacity for planning to plot revenge. It’s just a very interesting coincidence that he happened to upchuck tonight, when photos of his toenails hit the internet. 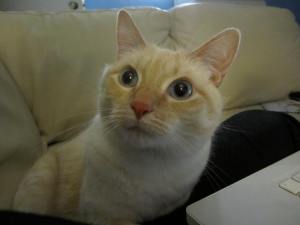 Whatever the case, Leroy is right back in my lap, and he isn’t talking.